1 Timothy 1:15 to save sinners (Listen to, Dramatized or Read) 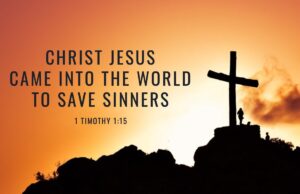 I thank Christ Jesus our Lord, who has given me strength, that he considered me faithful, appointing me to his service.
Even though I was once a blasphemer and a persecutor and a violent man, I was shown mercy because I acted in ignorance and unbelief.
The grace of our Lord was poured out on me abundantly, along with the faith and love that are in Christ Jesus.
Here is a trustworthy saying that deserves full acceptance: Christ Jesus came into the world to save sinners—of whom I am the worst.
But for that very reason I was shown mercy so that in me, the worst of sinners, Christ Jesus might display his unlimited patience as an example for those who would believe on him and receive eternal life.
Now to the King eternal, immortal, invisible, the only God, be honor and glory for ever and ever. Amen.
Timothy, my son, I give you this instruction in keeping with the prophecies once made about you, so that by following them you may fight the good fight, holding on to faith and a good conscience. Some have rejected these and so have shipwrecked their faith.
Among them are Hymenaeus and Alexander, whom I have handed over to Satan to be taught not to blaspheme.

GNT … This is a true saying, to be completely accepted and believed: Jesus came in to the world to save sinners. I am the worst of them,’

We are all sinners and continue to sin but don’t let that stop you from being an effective Christian, don’t let sin convince you that you are not worthy to be a good witness.