Matthew 27_57 Jesus Is Buried; After three days I will rise again (Listen to, Dramatized or Read) 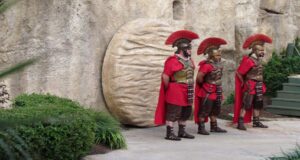 When the even was come, there came a rich man of Arimathaea, named Joseph, who also himself was Jesus’ disciple:
He went to Pilate, and begged the body of Jesus. Then Pilate commanded the body to be delivered.
And when Joseph had taken the body, he wrapped it in a clean linen cloth,
And laid it in his own new tomb, which he had hewn out in the rock: and he rolled a great stone to the door of the sepulchre, and departed.
And there was Mary Magdalene, and the other Mary, sitting over against the sepulchre.
The Guard at the Tomb
Now the next day, that followed the day of the preparation, the chief priests and Pharisees came together unto Pilate,
Saying, Sir, we remember that that deceiver said, while he was yet alive, After three days I will rise again.
Command therefore that the sepulchre be made sure until the third day, lest his disciples come by night, and steal him away, and say unto the people, He is risen from the dead: so the last error shall be worse than the first.
Pilate said unto them, Ye have a watch: go your way, make it as sure as ye can.
So they went, and made the sepulchre sure, sealing the stone, and setting a watch.