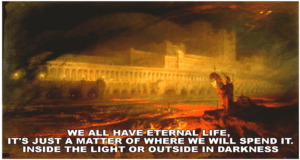 GNT … Here is a picture of the final judgement, ‘the end of the world;’ not a parable, but fact.
Into eternal punishment or eternal life, both never ending.
The word ‘punishment’ meaning eternal misery, not ‘annihilation;’
Whereas ‘life,’ the opposite expression, means glorious continued existence.

We all will live eternally, it just depends on where we spend it, in the Light or in the darkness!