Matthew 14:17 five loaves of bread and two fish (Listen to, Dramatized or Read) 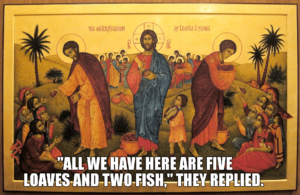 When Jesus heard what had happened, he withdrew by boat privately to a solitary place. Hearing of this, the crowds followed him on foot from the towns.
When Jesus landed and saw a large crowd, he had compassion on them and healed their sick.
As evening approached, the disciples came to him and said, “This is a remote place, and it’s already getting late. Send the crowds away, so they can go to the villages and buy themselves some food.”
Jesus replied, “They do not need to go away. You give them something to eat.”
“We have here only five loaves of bread and two fish,” they answered.
“Bring them here to me,” he said.
And he directed the people to sit down on the grass. Taking the five loaves and the two fish and looking up to heaven, he gave thanks and broke the loaves. Then he gave them to the disciples, and the disciples gave them to the people.
They all ate and were satisfied, and the disciples picked up twelve basketfuls of broken pieces that were left over.
The number of those who ate was about five thousand men, besides women and children.

GNT … The feeding of the Five Thousand is the only miracle mentioned by all four Evangelists, and the first occurrence fully narrated by them all. It also furnishes a definite chronological point for a harmony of the Gospels. It is in many respects the most incomprehensible of all the miracles.

The attempts to explain it as a natural event have been utter failures. The four Evangelists could not write as they have done, of a ‘myth,’ a ‘parable,’ or a ‘symbol.’ Either this was a miracle, or the Evangelists have wilfully falsified.

Our Lord gave freely in the wilderness: healed, taught, and fed all. ‘The Bible, so little in bulk, like the five barley loaves and the two fishes; what millions upon millions has it fed, and will it feed, in these last days all over the world!’