Underground is where we are heading. Again! (Listen to or Read) 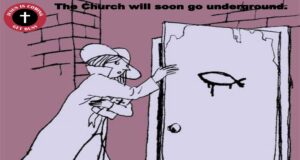 The description of an “Underground Church” reflects language of the Early Church, referring to the Church growing in the catacombs of Rome, but the term was made popular during the Cold War in Communist China, when illegal churches gained recognition.

Underground Churches are also sometimes referred also to as “Secret Home Churches”. There is no established organisation structure of underground churches, though they tend to be clustered around a number of Evangelical type personalities. We could call them Apostles.

The early Church in the 1st to 3rd century had its underground Churches.
Until and during the rule of Caesar, the Roman Empire was overwhelmingly pagan and polytheistic. The pagan views were tolerant of other believers’ gods as there could be a god for anything. The Roman Empire was also tolerant of the beliefs of the people as long as everyone performed their civic duty to sacrifice to the gods and to the emperor. No one took much notice of what the people truly believed and if the people of Rome had true faith in their gods.

Following their beliefs, early Christians refused to sacrifice and worship the Roman gods and emperor, as they chose to worship their only god. This was not acceptable to the Roman emperor, as such Christians became criminals for not paying homage to him.

As Christianity became more popular, Christians became more conspicuously absent from the public religious sphere. In time, they became the scapegoat for all things bad; because they did not perform their civic duty of worshipping the Roman gods, they were blamed for everything from plagues to drought to bad crops. It was to the point, that in the second century, Christians were forced to either sacrifice to the emperor or sacrifice their lives. During this time of persecution, arenas like the Colosseum, which were used to execute convicted criminals, were now used to torture and execute convicted Christians.

In AD 250, the Christian religion had grown so large that they needed widespread organisation. As this new religion grew, Roman rulers felt their power slipping away. Christianity was a threat to the Empire and it was decided that Christians should be dealt with in a large-scale effort.

Churches in communist countries from the mid 1900s.
Officially, the Communist Party is atheist and Underground Churches were and are still considered illegal by governments.

Martin Luther King Jr once preached.
There are at least two reasons why I as a Christian Minister feel obligated to talk to you about Communism.

The first has to do with the widespread influence of Communism. It is believed in by more than 200,000,000 people covering one fifth of the earth’s surface. Multitudes have embraced it as the most coherent philosophy and the greatest single emotional drive they know.

A second reason why the Christin minister should speak about it is that Communism is the only serious rival to Christianity. Other historic world religions such as Judaism, Mohammedanism, Buddhism, Hinduism, may be listed as possible alternatives to Christianity, but for Christianity’s greatest rival we must look elsewhere.

Certainly, no one in touch with the realities of the contemporary situation can deny that in the crisis confronting civilization Christianity’s most formidable competitor and only serious rival is communism.

In the first place it leaves out God and Christ. It is avowedly secularistic and materialistic. It regards religion psychologically as mere wishful thinking, intellectually as the product of fear and ignorance, and historically as serving the ends of exploiters. Because of public opinion authorities have had to modify some of their anti-religous doctrines, but the official policy of the communist party is still atheistic.

In the second place the methods of communism are diametrically opposed to Christianity. Since for the Communist there is no Divine government, no absolute moral order, there are no fixed, immutable principles. Force, violence, murder, and lying, are all justifiable means to the millennial end. Said Lenin, “we must be ready to employ tricking, deceit, and lawbreaking, withholding and concealing truth.” That the followers of Lenin have been willing to act upon his instructions is a matter of history.

In the third place, the end of communism is the state. Man becomes only a means to that end. And if any man’s so called rights or liberties stand in the way of the state, they are simply swept aside. His liberties of press, or pulpit expression, his freedom to vote, his freedom to listen to what news he likes or to choose his books and even his friendships are all restricted. Man has to be a servant, dutiful and submissive, of the State, and the state is omnipotent and supreme.

Now there can be no doubt that all of this is the negation not only of the Christian belief in God and the moral order that he has established, but also of the Christian estimate of man. I am cognizant of the fact that the record of the Christian Church has been smeared in the past by infamous persecutions and the irremovable strain of the inquisition, but even so Christianity at its best has never let go the ideal that man is an end because he is a child of God, and that the end of all life is the glory of God. The Christian ethic would affirm that destructive means can never justify constructive ends because in the final analysis the end is pre-existant in the mean.

So let us not fool ourselves these two systems of thought are too contradictory to be reconciled. They represent diametrically opposed ways of looking at the world. and transforming the world.

We must try to understand Communism, but never can we accept it and be true Christians.

Yet we must realize that there is something in Communism which challenges us all. It was the late Archbishop of Cantebury, William Temple that referred to Communism as a Christian hersy. By this he meant that Communism had laid hold on certain truths which are essential part of the Christian view of things, but that it had bound up with them concepts and practices which no Christian can ever accept or profess. In other words, although Communism can never be accepted by a Christian, it emphasizes many essential truths that must forever challenge us as Christians. Indeed, it may be that Communism is a necessary corrective for a Christianity that has been all to passive and a democracy that has been all to inert.

It should challenge us first to be more concerned about social justice. However, much is wrong with Communism we must admit that it arose as a protest against the hardships of the underpriveleged. The Communist Manifesta which was published in 1847 by Marx and Engels emphasizes throughout how the middle class has exploited the lower class. Communism emphasizes a classless society. Along with this goes a strong attempt to eliminate racial prejudice. Communism seeks to transcend the superficialities of race and color, and you are able to join the Communist party whatever the color of your skin or the quality of the blood in your veins. {Marx was a Jew & later Christian}

With this passionate concern for social justice Christians are bound to be in accord. Such concern is implicit in the Christian doctrine of the Fatherhood of God and the brotherhood of man. The Christian ought always to begin with a bias in favor of a movement which protests against unfair treatment of the poor, for surely Christianity is itself such a protest.

The Communist Manifesta might express a concern for the poor and oppressed, but it expresses no greater concern than the Manifesta of Jesus with this as its opening sentence: “The spirit of the Lord is upon me because He hath anointed me to preach the gospel to the poor; He hath sent me to heal the brokenhearted, to preach deliverance to the captives, and recovering of sight to the blind, to set at liberty them that are bruised, to proclaim the acceptable year of the Lord.” And so a passionate concern for social justice must be a concern of the Christian religion.

We must admit that we as Christians have often lagged behind at this point. Slavery could not have existed in America for more than two hundred and fifty years if the Church had not sanctioned it. Segregation and discrimination could not exist in America today without the sanction of the Church. I am ashamed and appalled at the fact that Eleven O’clock on Sunday morning is the most segregated hour in Christian America. How tardy we have been. The Church has to often been an institution serving to crystallise the patterns of the status quo.

Who can blame Karl Marx for calling such a religion an opiati. When religion becomes involved in a future good “over yonder” that it forgets the present evils “over here” it is a dry as dust religion and needs to be condemned {We must be concerned about the gulf between [superfluous?] wealth and abject poverty. Marx revealed the danger of the profit motive as the sole [basis?]}[remainder missing]

Communism also challenges us to invite all Christian forces for action. Too often have we been preoccupied with debates about orders and sacraments and ritual and denominationalism while civilization is engaged in a race with catastrophe. If we are to win the world to Christ we must rise above our differences realizing that we have unity of purpose and that God is not a denominational God.

Lastly we are challenged to dedicate and devote our lives to the cause of Christ as the Communist to Communism. We cannot accept their creed, but we must admire their zeal, and their readiness to sacrifice themselves to the very uttermost and even to lay down their lives for a cause that they believe is going to make the world a better place. I have seen communist in universities passionately attempting to win their associates to communism.

How many Christians students in our universities today have ever attempted to win other students to Christ? How many of you on your jobs have ever attempted to win others to Christ? Would today that the Christians fire were burning with the same intensity in the hearts of Christians as the Communist fire is burning in the hearts of Communists. We must match the evangelistic passion of the Communists. We must unreservedly commit ourselves to the cause of Christ.

It seems that I can hear a voice crying through the vista of time: “ye shall be witnesses unto me both in Jerusalem, and in Judea and in Samaria, and unto the uttermost part of the earth.” I can hear the same voice saying, “go out into the highways and hedges and compel men to come.” I can hear the same voice saying, “Go ye into all the world, and preach the gospel to every creature.” Who this afternoon will answer saying: “Here am I O Lord, and I unreservedly commit myself to thy cause.”

Today, we see the merging of Dictatorship and Communism, and we call it Democratic Socialism.
The Church is heading underground. Do you see it?